My Experience of my Grandma Passing Away

My grandma lived until she was 98, so it wasn’t a big surprise when she passed away. I’d almost been expecting it for ten years. But what I learned about death through her passing was unexpected.

One night I woke up suddenly from a very strong dream where one of my teeth had fallen out. It wasn’t like this was just something that happened in the story of my dream, this was a big event that I woke up from.

In my experience the dreams that I wake up from with the impressions still vivid seem to be important, often with messages. Either the power of the dream wakes you up or you’re woken to remember its message better.

Either way, I knew this dream was not ordinary, and I checked the meaning of the symbol in Belsebuub’s book on astral travel and dreams. It said: loss.

My grandma came to mind. I phoned my father soon after, who had been living with her for the last five years or so to look after her, but he didn’t mention any change.

A few weeks later I dreamt my grandma was going through her belongings. She accidentally threw away her photo albums, all those images of her life, and she seemed muddled and confused. I felt then that she was preparing to go, that it wouldn’t be long.

Just after Christmas my dad was due to go away with my sister to Paris. My sister was back in the UK from Australia for just a few weeks – she only does this every two years. So this was a big thing for my dad.

It was arranged for his sister, my aunt, to take his place for that time to look after my grandma. Just before he was due to go he called the local doctor in to check on my grandma – she’d had a bit of a cough and was sleeping more than usual.

The doctor checked her over and said she was fine — just old. So my dad left. My aunt is a doctor too, and when she arrived she also examined my grandma. But my aunt saw she now had pneumonia.

When I was told the situation I thought it must be the end, and it was. My dad and sister had just got to Paris when they called to tell me she’d died.

That night, I dreamt I was in her house, one I knew so well. She was shuffling around the hallway, it was such a familiar sight. Then I was curled up behind her in her bed, giving her a hug. I could see her shoulder and nightdress, but felt she wasn’t really there or aware of my presence. It was six weeks after my dream about loss.

A couple of days later I traveled across the country to be with my aunt and help with the funeral preparations. It was decided that my dad and sister should stay in Paris, where they could have something of a break.

It was then that I started to see something incredible. I felt that I could perceive how people had been moved around like chess pieces to make my grandma’s death more peaceful for everyone.

It was almost as if she had planned it exactly how she had wanted it — though it must have been a higher intelligence. My father was very shielded, and my aunt was actually with her when she passed away.

Even the fact that the first doctor said nothing was wrong meant that she could stay at home rather than go to hospital, and that my dad left with a clear conscience.

My grandma even got to spend a last night in her own bed, as it was late when she died and my aunt was asked if it was OK for her to stay until the morning. At one point my aunt commented on how my grandma habitually slept and it corresponded with how she had been lying when I was with her in the dream I had the night she died.

I didn’t know her body had stayed at home, and I was left feeling that I had really been there, that I had seen and been with her ‘ghost.’

The fact that I saw her doing the same thing that she would have been doing before she died makes me feel like it was her personality, repeating habits. I don’t feel like I met the ‘real’ her, like in this experience.

The other ‘perfect timing’ thing was that all her grandchildren were in Europe for the first time in years, so were all able to attend her funeral. At the funeral, I learned about the telepathic power of emotions. 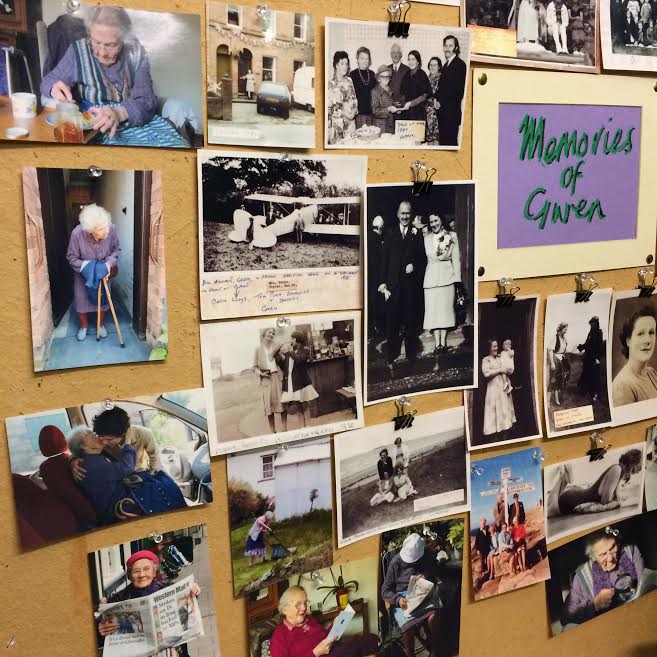 As soon as I walked into that full chapel, I sensed the combined effect of people’s emotions as a palpable atmosphere. Though I tried to stay free of it, an enormous wave of emotion hit me and pulled me into a sorrow that I could hardly shake for the whole of the service.

I know not all deaths are like this. Some are ‘terribly timed’, too soon, violent and awful. But not this one, for whatever reason. Similarly some lives are full of hardship and suffering, others seem to have been dealt a different hand. Perhaps there are similar laws that govern death as govern life.

My grandma’s death seemed overlooked by a very loving and caring intelligence that oversaw the whole process and I felt like I could intuitively sense this presence. It’s said that people often meet representations of loved ones when they die, to provide comfort. In this case this effort to provide comfort seemed to extend to those that were left behind too, as well as for my grandma in the physical part of the process of dying.

The painting of the Angel of Death, by Evelyn De Morgan, struck me when I first saw it, as I’d never seen images of this angel full of compassion before, only scary ‘grim reaper’ type portrayals.

Images like this one, experiences like this one, as well as Belsebuub’s explanations of karma, death, and the cycle of lives have helped me realize that even things like karma and death are administered by beings that are full of wisdom and love.

My grandma passing away acted as a stark reminder that death is waiting for me, and everyone. This was one of the biggest reflections it evoked, and I feel that I saw this realization behind many people’s grief too.

This talk by Belsebuub has a lot of profound information about the process of dying, and about the importance of seeing life in the context of death.